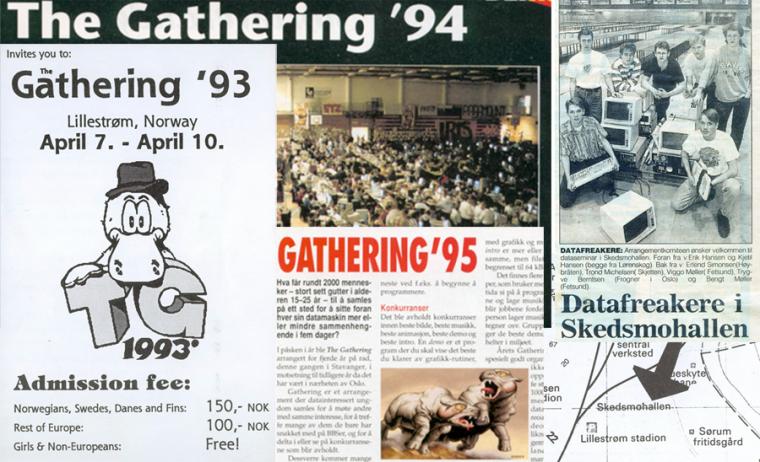 In The Gathering's early years it was a restless event which moved on several occasions, trying to find its final form. One thing was for sure, there were a lot of computer interested youths out there, waiting for a place to show their digitial creations.

In a small series of articles leading up to this year's The Gathering, every other day we will present a new time era in TG's history from a creative perspective. We shall begin at the beginning, in Skedsmohallen, Lillestrøm - the easter of 1992. This article's author attended with good friends after reading lots about the event in the local press and the computer press beforehand. What we experienced back then, wasn't only a fantastic atmosphere and the beginning of something big, but also tremendous competitions within graphics, music - and the magic that happens when joining these elements and making them move - demos.

Sauron - Beauty and the Beast

Sauron from the group Equinox participated with the winning picture in the graphics competition with Beauty and the Beast, while Gin from Carnage won the music competition with the track Party Time. Back in those days, there was only one proper platform for demos, and that was Amiga - and the competition was won by Spaceballs with Wayfarer, just inches before Andromeda with D.O.S.

The following year, The Gathering returned to Skedsmohallen, and 1993 was in every way similiar to the previous year - in both shape and content. This was the last year in Skedsmohallen. New this year, was the intro competitions - like demoes, but with a sizelimit designed to squeeze the little extra out of the groups. The graphics competition was won by Archmage from Andromeda with The Dhryads, while last years winner, Sauron, had to settle for third with Freak. Vinnie of Spaceballs won the music compo with Jammin' Cindy. The intro competition was won by the new supergroup Lemon., with A 40k Intro For The Gathering Intro Competition, and the most prestigious prize - demo - was won by the Danish supergroup Kefrens with their enormous production Desert Dream.

In 1994, The Gathering moved for the first time, and was held in Rykkinnhallen in Bærum municipality, just outside Oslo. The new hall brought its own problems, with power cuts among other things, but the creative compos was nonetheless a success. For the first time, competitions for the PC were held, in addition to Amiga, and all Amiga contributions accepted use of the AGA-circuits in the new Amiga models. The graphics competition was won by Fairfax of Andromeda with the colorful ZZ Madman, and the music compo was won by guitar track Sound O' Da Lunatic by Svolkraq from the PC-group Gollum. Amiga Intro was won by Stone Arts with Bjarne, while the PC intro was brought home by Das Grelle by Gollum. Amigo Demo was this year won by Andromeda with Sequental, while PC demo was won by a group called Five And Then Some with Superunknown.

The Gathering's travelling days was to end the following year, but not without stopping in Stavanger in 1995. This year, The Gathering had a completely new crew behind it, and to be completely honest, 1995 is widely regarded among the long-time-participants as the worst event in TG's history. Luckily the creative compos weren't affected particularly, and this year brought the by now familiar amounts of quality and awesomeness.

Graphics were won by Bridgeclaw of Gods with the picture God's Grace, and this was the only compo with no adjustments. Music was now split into two separate competitions, 4 channel - the traditional Amiga module with four channel sound - and Multichannel - which let perticipants use up to 32 simultatious sound channels on PC's. The 4 Channel compo was won by Syntex of Stone Arts with Let It Linger, while Mutlichannel was won by Jogeir Liljedahl of Virtual Dreams and Scoop.

Intro and Demo had also gotten new categories - 4k og 64k, for a total of six categories - Amiga 4k, 64k and Demo, and PC 4k, 64k and demo. Amiga 4k was won by Spaceballs with Babenoise - the first ever 4k intro with sound - while PC 4k was won by 4kbflight by Scoop. Amiga 64k was again won by Spaceballs, with Jobbo, while PC 64k was won by Valhalla with Fluid Motion. The democompetitions in the first and last TG in Stavanger was won by CNCD and Parallax with Deep on the Amiga, and Complex with Dope on PC - featuring the amazing soundtrack Onwards. Finland on top in both competitions, then.

In two days, the story continues - with the story of when The Gathering first arrived at Hamar.

Follow @gatheringorg
Name:The Gathering 2012 Description: In The Gathering's early years it was a restless event which moved on several occasions, trying to find its final form. One thing was for sure, there were a lot of computer interested youths out there, waiting for a place to show their digitial creations.