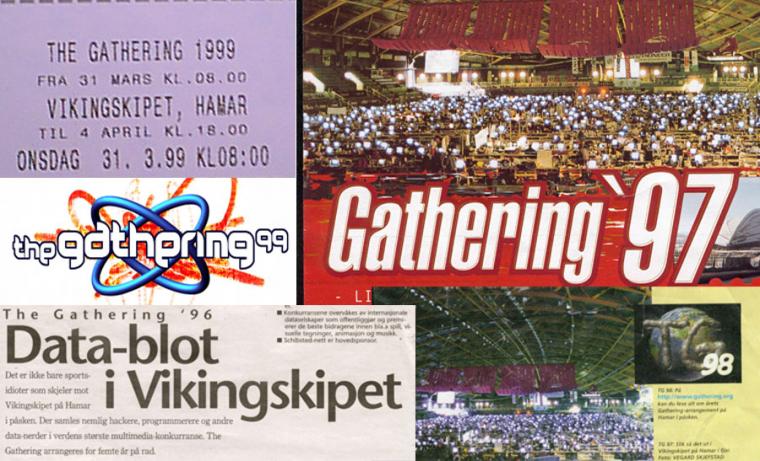 A lot of things were new in 1996 - not only the location, but for the first time all participants had access to a fast Internet connection. The Wild compo was another new addition this year – a kind of "anything-goes" compo, where you could submit almost anyything that didn't fit in any of the other compos. There were competitions for older model Amigas as well as for the Commodore 64, but none of these got a lot of contributions.

Louie - Me And My Little Sister

The graphics competition was won by a Swede, Louie of The Black Lotus with the oustanding Me And My Little Sister, while Vinnie of Spaceballs again won the 4 channel music, and COdec won multi channel music with Asian Dawn II. The Amiga compos were dominated by the new supergroup The Black Lotus this year, which took both first and second place in Amiga 4k with Gizmo and EQ-4k, and first place in Amiga demo with Tint. Tint has been mentioned as an outstanding demo even in recent years, and was given a glowing recommendation by The Gathering boss Vegard Skjefstad during one of the demoshows from the mainstage in 2010. The only Amiga compo The Black Lotus didn't bring home, was first prize in the 40k intro, where the Finns in Stellar brought home the prestigious prize with Lights. The PC competitions began in earnest to show muscles this year, and with a Norwegian victory in 4k with Waterworld by Scoop, once again the Finns brought home the rest - Orange with You Am I You Am The Robot in 64k intro, and CNCD with Inside in the demo compo.

1997 was The Gathering's second year in the Vikingship, and this year brought new adjustments and experiments to the competition structure. So called Textmode demos - demoes made in textmode in ms-dos on a pc, that is, only letters, digits and symbols from regular text mode - got its own demo competition. Graphics got a little side category with raytracing. Further, music was now merged into one competition, and PC and Amiga 64k Intro were merged, probably because of the low number of contribution in the Amiga competition.

Graphics was won by the beautiful Angelic Particles by Louie and Danny of The Black Lotus - which in addition to winning the graphics competition also showed up in the winning Amiga demo and the 3rd-placed pc demo! There wasn't any 4k compo for the Amiga this year, but there was one for the PC, which was won by Index with Bubble. 64k was, as mentioned earlier, merged, and the Danes in Fudge won with Gene. In the Amiga demo competition, The Black Lotus once again came out on top with the awesome Captured Dreams, and won with a large margin. The Germans in Artwork came in second, with Exit Planet Dust. The pc demo competition was once again won by Finns - CNCD and Orange trumped with CNCD vs Orange, with Rage's Robotnik and The Black Lotus' Astral Blur tight second and third.

The Gathering was already an undisputed success, and 1998 was the first year it was totally sold out - three weeks in advance! Another year, more adjustments. Once again, music was divided into 4-channel and multichannel. In addition, a new animation compo was established, and new demo compos for demos written in Java, and demos written with 3D-acceleration. Yup, you read that one right. It was still not really mainstream for graphic cards to come with 3D-rendering functionality, and all the beautiful worlds built up in demos were still mostly just pure code. The Textmode compo was continued this year.

On the 64k side, The Black Lotus was back on Amiga, and won convincingly with Imitation None, and Jive 2 from Sublogic won the PC 64k. And then, the new demo categories - Komplex had changed the first letter of their group since their triumph with Dope back in 1995, but still brought home the first prize in Java with Forward and first prize for 3D-accelerated demo with Planet Cornball! This years best demo on Amiga went to a subgroup of the old giants TRSI called Mellow Chips, with the demo Rise. Best PC demo was won by Gods with Dimensions.

1999 was the fourth year in the Vikingship for The Gathering. Both the Java and the 3D-accelerated demo competitions were continued, but unfortunately the latter was cancelled due to a lack of contributions. This year, the music compo got a new branch - High Quality, in other words; mp3 and other streaming formats had come to stay.

The traditional graphics compo was won by TMK of iNF for the second year in a row, now with Blue. Raytraced graphics was won by Dr3d with Bounty Hunter. 4-channel music was won by Rolex of Depth and Massive with Kamelon, and in the multichannel compo Anticipations-TG99 by g00ber - for many of you, known as the person in charge of the creative compos at TG today, Ola Gundelsby - won. In the new category High Quality Music, Antasal reached the top with Sudden Trip Back Home. In Amiga 4k intro, Extreme Entertainment won with Freedom, while Digimind took the first prize in PC 4k intro with Animal Planet. Amiga 64k was won by Spaceballs with Fushion Is No Good For Me, and PC 64k was won by Purple with Public Demand. The "little" democompo for Java was this year won by Digital Nerds with Lucid Dreams. So, to the demos. On the Amiga Spaceballs started a string of winning contributions with the release of Supermonster, which came in just in front of Ephidrena's Flux. PC Demo was won by a group which had really started to make its mark in the last few years leading up to this - iNF won with Yume 2000 - (Future World Mix). The author of this text would like to add, that the results from this year was absolutely, fantastically messy, so, if anything is wrong or inaccurate, please - comment in the field below, and we will correct as neccessary. But we think we got it right. Mostly.

Follow @gatheringorg
Name:The Gathering 2012 Description: A lot of things were new in 1996 - not only the location, but for the first time all participants had access to a fast Internet connection. The Wild compo was another new addition this year – a kind of "anything-goes" compo, where you could submit almost anyything that didn't fit in any of the other compos. There were competitions for older model Amigas as well as for the Commodore 64, but none of these got a lot of contributions.