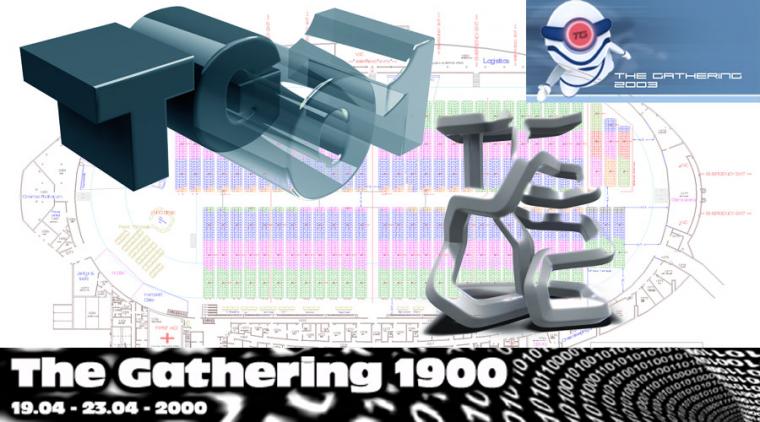 The year 2000 arrived at The Gathering, unfortunately it was about to be a few low years for the creative environment. The number of contributions were decreasing, and the quality didn't hold the expected level in the first few years of the new millennium. Nonetheless, some golden nuggets did show up, and we're going to focus on some of the better ones.

At The Gathering 2000, it was decided that the Amiga and PC competitions for intro and demo were to be merged. The old faithful servant, 4 channel music, said goodbye, and the music competitions were now branched into Tracked and MP3. The Animation competition changed its name to Video FX.

Traditional graphics was won by the Hungarian Inferno of Haujobb with the picture Avatar, while first place in rendered graphics went to Silver3D with the picture Adorable, Horny Chick. We know, not all that politically correct. In tracked music Edzes took first prize with Beautiful Dreams, and in mp3 Anone won with the track Unreal. As mentioned earlier, the intro competitions were merged this year, and it was a close race between the winner glAss by Psikorp (pc), Airspace by Nocturnal (pc) on second and Swaptro by Ephidrena (amiga) in third. Java demo was won by the collaboration demo No You Don't by Blashpemy, TPOLM and Prone. Like last year, 3D accelerated demo was arranged, but there wasn't enough contributions to carry through. In the end, contributions were shown, but could not be voted on. The Demo competition included both amiga and pc contributions, and again - for the second year in a row - Spaceballs won with Hypnopolis.

2001 was the sixth edition of The Gathering held in the Vikingship. The video fx competition from last year was renamed back into animation. The intro competition was once again split into amiga and pc, while the demo competition was still combined. Java and 3d-accelerated demo was gone, and another web technology took over - Flash. The biggest talking point of the year was what happened in the 4k intro compo, where Repoman of Three Amigos competed - and won - with an intro he had stolen from another group! Obviously, he was found out by the observant demosceners in attendenace, and called out from the main stage.

Graphics was won by Inferno of Haujobb for the second year in a row, this time with Warrior Babe. Rendered graphics was won by a gentleman answering to the name Dr_3D, which won with a picture named Pirates. The Wacko and Kaktuskaffe won the tracked music compo with Kamelene til TG2001, while mp3 music was won by Gonzo with Goblin Construction. The new Flash compo was won by lug00ber and Fuglemat with Fiskeslo. The combined 4k Intro was won by Spaceballs with Badass 5000, while 64k Intro was won by Nocturnal with mx.9kru. As mentioned, the demo compo was split into Amiga and PC. In Amiga demo, to no surprise, Spaceballs won for the third year running with Powergod. PC Demo was won by Fadebout with Triple Five Tsunami, just in front of Nocturnal with 3pm.lived (pRot3kt0r).

In 2002, the combined 4k and 64k intro system was continued, but there were still separate demo compos for amiga and pc. Also, Alternative Platform Demo was introduced, a competition for demos on all kinds of hardware - like cell phones!

As usual, there were two graphics compos. The drawn compo was won by a familiar name, TMK of iNF with Dreamworld. Rendered graphics went to Denis Alekseev with Homeless. Tracked music was won by System Talayot with The Dark Side, while mp3 (which for the occasion had changed its name back to High Quality Music) was won by lug00ber of Kvasigen with These Walls. The new compo for obscure software, Alternative Platform, had a rare battle for the first prize - Excess and Contraz won with Curto Servico de Mesagem, one small point in front of Tralala Vrooom by Kvasigen and Nocturnal. In the 4k combined intro, Push Entertainment won with ECHT, while 64k Combined Intro was won by Nocturnal with Masse Lego. Amiga demo went - and you'll never guess this one - to Spaceballs with Scrimm. The winner of the PC demo compo was iNF with Thermo Plastique.

The last year we're going to cover this time around is 2003. Java, Flash and Alternative Plattform were removed, but little else was changed this year - except for the changes made during the party. Amiga demo had so few contributions, it had to be combined with pc demo. Nonetheless, two of the three top placements were Amiga demos.

Pixel graphics was, for the first time in history, won by a girl - Fuglemat with Disappointed Virgin. Rendered graphics was won by the same person as last year, Denis Alekseev with Mission Impossible. Music had two competitions - tracked music, won by Edzes with Sorrow - and ogg/mp3 music, was won by Dezerate with - please excuse our/Dezerates language - Fitte I slipset. As far as we can see for the available source material, 4k intro competition was held. 64k intro, on the other hand, was held, and won by Neon and lug00ber with lol 2k!!. The demo compo for Amiga and pc was, as previously mentioned, combined, and on top we find the legendary demo World Domination by Odd. Even though the Amiga had significantly less powerful hardware than the pc, the three Amiga demos did exceptionally well, scoring both second place (Ephidrena with Fake Elektronik Lightshow) and third place (Spaceballs with Dark Helmets) in the competition. 2003 was a good year - definitively better than the ones that started the new millennium off - and it was going to get even better.