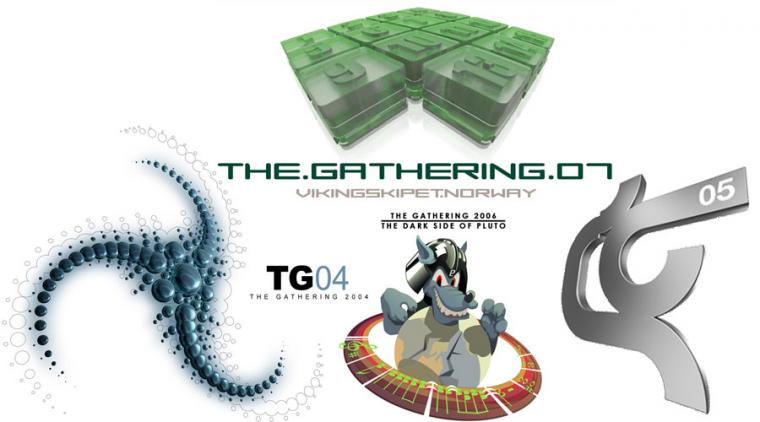 We continue our history of the creative competitions at The Gathering, this time 2004 - 2007.

After a few moderate years an the start of the millennium, a definite sense of improvement started to show in the 2003 compos, and the feeling was further reinforced in 2004. Seperate platform competitions now belonged to the past, and a focus on including game developers in the creative world was new.

As usual, lets start with the graphic compos of 2004. Kusma of Excess won the drawn part of the compo with Bitch2K3K9K. By the way, Kusma is one of our programming mentors this year, and can be congratulated on his 2004 victory in the creative lounge for anyone who wants :) Rendered graphics was won by Pål Syversen with the picture Hottentott, just inches in front of Marius Jonsson with Fighting Falcon. Tracked music was won by lug00ber with Respekt, while high quality music was won by Flipside with 30000 And Counting. Number two in both compos was Edzes of Kvasigen and Rebels, with Chippelakke Chippelakke!! and Alumina.

The intro and demo compos were, as before, combined. 64k intro had a very clear winner this year, with more than double the score of second place. Members of Excess and Kvasigen united, and made the monumental Nemesis. The music from this intro was made with Sanestation - a self developed socalled softsynth - which we have a seperate music compo for this year! Read more about the Sanestation compo. The winner in demo this year was the newbies in Outracks, with this years chief of Creativia in the lead, with our.demo. In second and third place, iNF with Pornographic, and Spaceballs with Hog, followed. The latter should be the last Amiga demo in TG history to reach top three.

The only real adjustment in 2005, was the addition of the Reason Music compo, in which all contributions had to be made with the Reason software.

The graphics compo was somewhat special this year, being the first victory of the extremely talented Mulm, with her contribution Luftslott. Mulm continued to do pretty well in the graphics compos to come, which resulted in her being recruited to work on several demos, and to eventually join the design team at The Gathering. Do you like this year's The Gathering design and background pictures? Mulm was one of the people who made that. RenderedgGraphics was won with a picture called theAlien by Thomas Døhlen. In tracked music, Aulin was victorious with his tune Super Ted In Outer Space, and in high quality music, Ola Prøis by Søta Vennar won. 64k went to Kvasigen with Cubism 2, with a safe margin down to second place. In the demo compo, Portal Process went all the way to the top with the robot demo Meet The Biots, while Outracks took second place with No Kelvin.

There were some changes in the compo structures in 2006; tracked music and rendered graphics disappeared, while themed graphics were added - a new concept for a graphics compo, where contributions had to follow a given theme.

Mulm rose to the challenge, and won both the regular graphics compo and themed graphics this year - with Vi Vil Ha Loff and A Grave Misunderstanding. She also claimed second place in the Wild compo, which we usually don't cover in this series. The Reason compo, which was added last year, was won by Kaktusen with Time Is Running Out. High Quality was won by Edzes with Sunset In Alcudia. 64k Intro was won by Portal Posse - an alias for our friend in Portal Process, known from last years demo compo winner - with Smoke This. This years demo compo was a close shave, between the Greeks in Andromeda Software Development with Animal Attraction, which won, and Outracks with Genesis. PlayPsyCo took third place with Treble And Bass.

After the uplifting quality of the contributions from last year, we have reached 2007 - and the last year for this little article. Again with some minimal changes in the compos, so lets get to it.

Not surprisingly, Mulm did as last year, and won both the regular graphics compo with Just Google It as well as themed graphicss with Trouble At The Martian Spring Factory. Reason music was won by Cathedral of Failure with the song Malevolent. Second place in Reason and first place in high quality music was won - the latter with a huge margin - by Kaktusen with the tracks Erase, Evolve, Complete and Commando. 64k Intro was won by PlayPsyCo with Mupé, followed by Nazareth Creations with Cubiform on second and Boozing Kupoz with Pocketrocket on third. The demo compo was just won by Outracks - after two years in a row on second - with Gamma. The demoscene's international organization, scene.org, chose to reward two of the contributions from The Gathering this with Scene.org awards - Mupé won Best 64k Intro and Gamma won Best soundtrack of the year.

Follow @gatheringorg
Name:The Gathering 2012 Description: We continue our history of the creative competitions at The Gathering, this time 2004 - 2007.