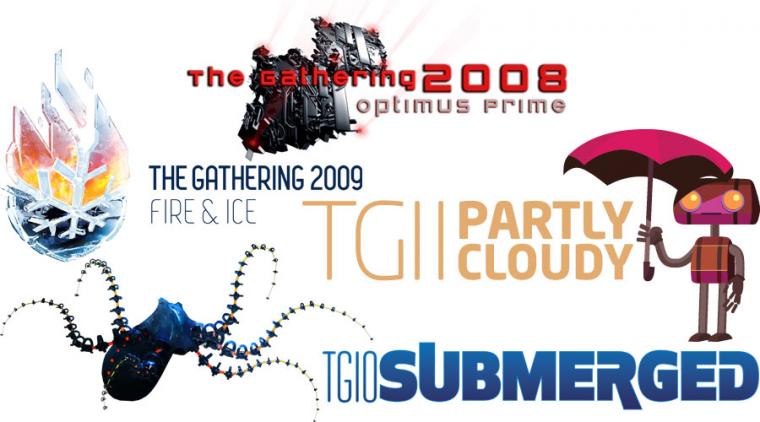 On our journey through The Gathering's creative history, we've reached the time right upto the present.

And then, on our journey through The Gathering's creative history, we've reached the present. 2008 didn't have any large adjustments to the competition structure, apart from the loss of rendered graphics for this year - so let's just go straight to the results:

Zeila - My Creatures of Light

Graphics was won by Julie M. Røsok with Angel, in front of Marilla with Pony Stole My Panties and Volant with Outside The Box. Themed graphics was won by Zeila with Transform The Earth, in front of Mogsters with Bio. On the music side, Kaktusen won Reason music with Impact, and Stian K won HiQuality music with Nostalgy. In the intro and demo competitions, there was one name bigger than all the others this year. After many years of contributions, PlayPsyCo finally made serious impact, and won both competitions! In 64k intro, they won with the fantastic Konami / Raze, where they made a whole world in only 64k. In demo, they won with Camden Town, in front of Nazareth Creations with Mercury.

2009 was, in many ways, an important year. With a brand new team in charge of the creative competitions  and a brand new sense of enthusiasm, it was perhaps the best creative TG yet. Among the news this year was the introduction of the creative lounge where interested people could hang out and get help and inspiration from our creative mentors. The graphics competitions got a huge upswing this year, with the reintroduction of rendered graphics and the new MS Paint compo - ending in a total of four graphics compos. The Reason compo was gone, but in its place we got the new competition "fast remix", in which participants were given a set amount of time in which to remix a given track.

Let's start with the new and resurrected graphics compos first; MS Paint graphics was won by Offwhite with Bris, followed by Phae with Mademoiselle. Rendered graphics was won by Martin Olsen with Nintendo Boy, while Volants Showdown made second. Themed graphics was decided by a jury, and in first place we find Marilla with Luna Travels. In the main graphics competition, Wic went all the way to the top with Sirens. Wic is also one of our mentors in graphics this year, and she will be at hand in the creative lounge. The new music compo, fast remix, was won by Dr. Macarena with Fast Remix TG09, only one single point in front of Kaktusen with Nesten Egil Mix. In the main music compo, Andre Söderlund won with Medley From Desert Heat Machinima - also the soundtrack of this years winner in the wild compo. Unfortunately, there was no intro compo this year, because of too few contributions. On the other hand, in demo, there was no lack of entries. The Greeks from Andromeda Software Development won with their monster demo Rupture. In second place, we find Outracks and Nazareth Creatins with Quantum, and Sunshine In A Box by Dead Roman on third. The international demoscene loved Rupture so much, that it was voted best demo of the year, best direction, and public choice award for the 2009 Scene.org awards.

The biggest difference between 2009 and 2010, was that 2010 got enough contributions in the intro competition - even with the top two intros being by the same group. We had found a form that worked, and little was changed from last year.

Let's start off with MS Paint again; the winner was Phae with Mage Queen Rosali, followed by Zeila with O Hai Thar in second and Stephanie Spoor with Wild Child in third place. Themed concept art was won by Yngvill Thon Sørensen with Mirror Shards. Rendered graphics went to Kim Aleksander Strandli with Super No More this year. In the main graphics compo, the roles from MS Paint were flipped - Zeila won with Walking My Pet, in front of Phaes Shamaness, and Wic with The Day of the Storm on third.

Fast remix was  won by Duccis' version of Danse Hele Natten - even though so many people found 0-Day Ivars version so unique, that it was awarded a special award during the prize ceremony. The music compo was won by the group OVRPWR - including previous compo participant Flipside - with Best Way of Defense, in front of Kaktusen with Revolution by Design in second and Joakim Skurk with The Next Level in third place. Out of three contributions for the intro compo, the top two was as mentioned from the same group - Youth Uprising. Magnus finished first, and JenterErForetrukket came in second in the competition. The third place went to Compo Xaviours with Polymono. In the demo compo, PlayPsyCo once again took back the crown, with the almighty Phon, in an obvious victory. Two of the people behind Phon are mentors this year, (Datsua and Kaktusen) and both of them are going to hold seminars. Phon was nominated for best soundtrack in the Scene.org awards, but unfortunately did not win.

2011 was a special year for the creative competitions at The Gathering, with awesome contributions and extra motivation from being chosen to host the prestigious Scene.org Awards! This in turn resulted in more international visitors and participants, which was reflected in the overall quality of the contributions. 2011 was an extremely good year for The Gathering on the creative side - maybe the best ever. Let's check out the results.

MS Paint was won by Tina Alfredsen with 3 Goldfish 1 Moon, in front of Zeila with Unmasked in second, and Offwhite with 0x4169 in third place. Themed concept art was won by Yngvill Thon Sørensen for the second year in a row, this time with The Three. Rendered graphics went to someone who had participated for years, Volant with Barely Regal. First place in graphics went, without much doubt, to Babe Runner by Anne Marte Markussen. Anne Marte is another one of our seminar holders this year, with a speedpaint session in Photoshop. Second place went to Yngvill Thons Sørensen with Raindrops.

The fast remix task this year was to remix last years winner, and the winner was Kaktusen with Kaktusens Bassface Remix. The same man brought home first place in the music compo as well, where he got everybody to walk around singing "We are the units that move as one" with his track We Are The Bass. Second and third went to Flipside with Beautiful Sight and Irvin with That's Some Incoherent Shit You're Talking There. The intro compo was won by Loonies from Denmark with Michigan, in front of Compo Xaviours with Milk - just eight points behind. The demo compo at The Gathering 2011 will probably go into history as one of the best ever. With a pretty small margin, PlayPsyCo once again took home first prize with We Crave Sustenance. Following hot on their heels was CNCD and Fairlight with Numb Res, followed by a row of strong demos - Outracks and Nazareth Creations with Struct in third, Dead Roman with the cutting edge Spheres On A Plane in fourth, Hobots by Kvasigen in fifth and Nitesco by Youth Uprising in sixth.

2011 was a monstrous year for the creative The Gathering, and we can't wait for what the participants have coded, produced, drawn, rendered and synced at home since we last met. We have not a shred of doubt, that 2012 will once more destroy all previous records.