– Apr 8, 2012
The winners of the Best Game Movie competiton have been announced!

– Apr 7, 2012
The winners of the Minecraft competition have been decided!

– Apr 6, 2012
There have been some changes to the Starcraft II schedule for Friday and Saturday

Text: Remy Bredesen  – Mar 28, 2012
Pre-Registration for the BYOC tournaments have opened, this is how you participate.

Text: Remy Bredesen  – Mar 18, 2012
The Noroff qualifying tournament for Starcraft II is now over and a winner has been decided 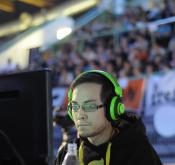 We have opened the gates to the Starcraft II Qualifying tournaments, register today!

More than honor and glory!

While honor and glory is well worth fighting for, there's also cash for the best of the best gamers.

Blow the dust off your keyboard!

Here's the three first tournament games for The Gathering 2012.