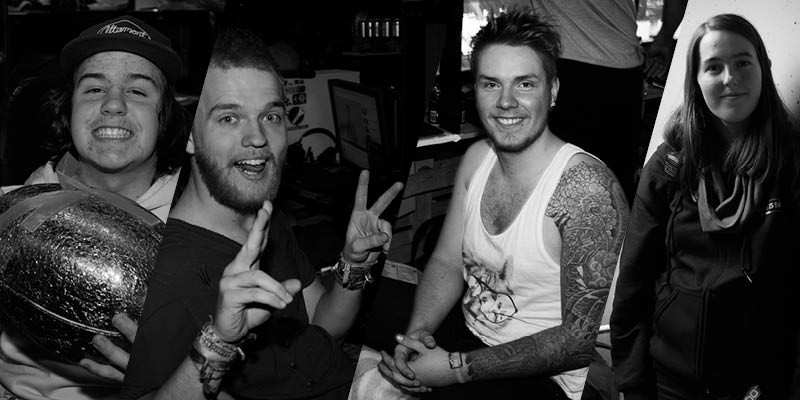 Everyday, during The Gathering, we will present you with some of the people you can meet here in Hamar Olympic Hall. We interview participants and crew to get them to tell us about their experiences, memories and expectations.

Kevin Johannes Melum, 17 years old, TG-virgin - participant.
“I expect to have a lot of fun, meet new friends, and not that much sleep. And of course a lot of gaming! The internet connection is the best thing about TG so far, it's really fast and awesome. I'm traveling with a bunch of people, we don't have a name for our group yet, but for now our name is "Fett". Me and a lot of other people thought it was AWESOME when the lights went out. Today I was the lucky guy who found the easter egg behind one of the stands. Inside the egg there were an envelope, a t-shirt, some stickers and a lot of candy, so I'm going to get sick I think. Im very happy that I found it and I'm definitely going to share since I already had a lot of candy. I will come back every year until i'm 50.” Jon Dahl, 21 years old, been to TG for 7 years - participant.
"I've been to TG for seven years now, and I still have all the wristbands. Some of them are starting to fall apart, but the oldest one, from 2009 is still on, barely. I've also gathered several other wristbands from different festivals like for example the Hove festival. My first memory of TG was in 2009, we had to stand in line for 5 hours while it was raining. I got a massive cold, but nothing several litres with energy drinks couldn't fix. All in all it was a good experience. Our scaffold is probably what gets us the most attention. We try to get seated in one of the middles rows with the most space so people can come by and hang out. Our disco ball has also become a big part of TG for us, last year we were voted the best disco shelf and we always try to improve. Therefore we bought a bigger disco ball this year to hang even higher so we could make more people happy. The shelf has been with us since 2011 and it's just getting bigger. There has been a lot of people stopping by to dance, even last years host Kim Daniel Sandnes joined in. The result was a special remix called “Jævelig bra disko” which is now our official TG song."

Joachim Isaksen, 20 years old, been to TG for 2 years - participant
"When i'm at TG I play LOL and everything else my friends make me play. I'm really interested in games and play everyday when I'm home. I sleep where I'm supposed too, at the tribunes. I might fall asleep in my chair, but I'm a heavy sleeper, I'm used to a lot of noise. At TG I eat a lot of pizza, hamburgers and drink Coke, Monster and Redbull, I basically drink what they sell in Sweden. My best memory is the cosplay competition two years ago, there were so much detail in the costumes, it was really awesome, my favorite was the winner, who had dressed up as Caitlyn from LOL.

It was a big dream for me to get a tattoo, I have wanted one since I was 14-15 years old, and getting one was the first thing I did when I turned 18, it's still not complete, it will take some time, but I work done on it every month. I've used a little too much money on it. I also have a piercing in my tongue, snakebites and stretched ears. Thats about it."

Trine Jakobsen, 23 years old, been to TG for 5 years - crew.
"This year I brought my little 4.5 months old girl, it's of course her first year at TG, but she's not the youngest one here. Although I'm not very fond of games and I'm not a gamer, I enjoy to help organizing events such as this. Everything began when I joined a local branch of Hyperion at my high school. There are a few of the good stories from TG that's unsuitable on print, but a story I remember well is when I worked at the Hyperion stand and went to charge my camera. On my way from the stand I saw two guys on rollerblades who had a lightsaber battle. It’s a sight you won't forget."