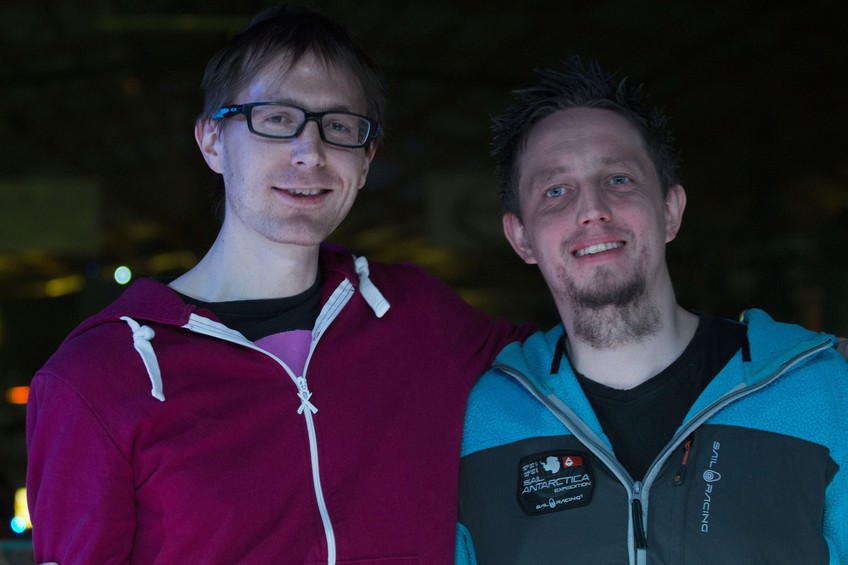 Humans of TG day 4: The Veterans

During The Gathering, we will present to you some of the people you can meet here in Hamar Olympic Hall. We interview participants and crew to share their experiences, memories and expectations. And today we reveal the story behind ARNE! Vidar Amundsen, 39 years old, attended The Gathering for 16 years - Crew
I’ve never been a participant at TG, only as crew, or a helper of any kind. My first year at TG was in 1997. Back then, girls got in for free because there were so few girls who wanted to attend. A lot has improved since then. I still have the poster from that year. I have a lot of memories from these last 16 years and a lot of weird stuff has happened. My advice to people who participate for the first time would be to experience the craziness of it all, although the craziest atmosphere is in the crew. I'm going to come back every year until i'm not allowed in anymore! When it comes to Arne, I think I've heard all the stories but I don't know which one is the real one. Martine Grymyr, 29 years old, attended The Gathering for 16 years - participant.
I've been to TG half my life! There is one episode that I remember in particular, and that was when i attended the only wedding I've ever been to, and that was here at The Gathering. I think that was kind of cool. I remember they made a parade with keyboards and the song they played was beautiful. If I could give one advice to those attending The Gathering for the first time it would be to try to experience everything. Attend all the shows shows and lectures. Absorb as much as you can. And of course, join competitions! The Gathering is what you want it to be, you have all the opportunities, grab them. If you don't, TG can be kinda boring. Right now I'm just playing some old games because I was supposed to attend a Minecraft competition, but it was too hard for me, so I did a ragequit. I'm going to come back next year if I get a ticket. If I don’t get a ticket I will be sad, but it keeps getting more difficult. I don’t see why I wouldn't come back. When it comes to Arne, I was here the year it all started, but I'm not confident that the story I have is the real deal. The story behind Arne is as mysterious as Arne himself. But I know for sure that he's out there somewhere. Trond Hessenschmidt, 28 years old, attended The Gathering for 14 years - participant.
My best memory from The Gathering is from 2007, DJ Flipside (Alex from Pegboard Nerds) played at the opening ceremony, it was really cool and there were some good songs. One advice from me to people who are attending The Gathering for the first time, is to drink a lot of water, eat well and try to get some sleep. Since my first time - 14 years ago, The Gathering has changed a lot. The first years the computer screens were so big and heavy, so we had trouble finding enough space. We struggled fitting two screens on the same table. This year we're a lot of people, so we didn't bring a shelf or anything. When we're a bigger group we usually bring a shelf, speakers and all kinds of stuff. The best thing about TG is the whole package, the atmosphere, the music and of course the waves of Arne. I've heard the stories, but I don't even remember half of them. Erik, 25 years old, attended The Gathering for 10 years - participant
My best memories? There are so many! One of my first years at The Gathering, me and my friend built this shelf that weighed around 65 kg. We spent quite some time carrying it, and after about an hour we got it all the way to our seats. It ended up in the trash container after The Gathering, even though we wanted to bring it back home. My advice to the TG-virgins must be to relax, shower, and just have a good time. You don't have to sleep all that much, you can do that when you get back home. Right now I'm playing a Counter-Strike tournament, it's cool, we've done well so far. The first thing I remember from The Gathering, is when me and my friend played against some girls. The loser had to buy the other team coffee, so it kind of turned in to a date. We won, but it didn't turn into love. Who Arne is? That's a really good question. I've heard the stories, but I don't know for sure. Stian Gustavsen, 31 years old, attended The Gathering for 20(!!) years - participant
All of the times I've been here are a bit jumbled as it's been so many times, but I remember something from every event. What I remember from the first The Gathering is the admission ticket, I remember it was some sticker which you had to put on your jacket, some years later it was a plastic sign and you had to use a safety pin to attach it. It has become much more fancy since then. There's been a lot of changes to The Gathering the last 20 years, but a special memory has to be the wedding that was here. The Gathering just keeps getting better every year, so to tell you about one thing that stands out is kind of hard. I'm not gaming anything, I used to play a lot when I was younger, at the time it was a life necessity to come here and meet other people with the same interests. In the later years it has become more of a tradition, to keep myself updated, meet other people and to be social with them. To not come here is not an option. It's not possible to do that, you can't not go to The Gathering. Show up, and take a part in something, everything runs so smoothly here, so you don't have to think about anything. The internet is always on, it's food here and its safe. It's a really great event, for people of all ages. I have a girlfriend, she's been here three years, but now we have a daughter, she's 4 soon, but she's been here and visited me here three years already. There are a lot of stories about Arne, I don't think you'll find a common agreement on which is the right one. Øystein Berge, 30 years old, attended The Gathering for 10 years - participant.
I have so many memories from this place. But the best one is to arrive Hamar Olympic Hall the first years. The whole part of standing in line for several hours being super excited and have these enormous expectations. It was absolutely crazy. I remember being sick to my stomach from all the excitement, it was really weird. I come back to The Gathering year after year for the same reasons as Stian, who is also a childhood friend, to experience all of it. There is so much to see and learn here. And you get to meet new people! I actually live i the Netherlands now, so I came back here just for The Gathering!

The "real" story of Arne:

The year was 2000, it’s 15 years ago, but I still remember it. A guy named Arne lost his lunch (I believe) and his mother stood in the reception with his lunch. Then they called his name over the PA-system, and said his mother was waiting for him. Arne never showed up and his name got called again and again and again, and people started getting sick of it. They joined in and yelled “Arne” to find him. And from then it's just been like this. I am pretty sure this is the right version. At least 99% sure that it happened like this.