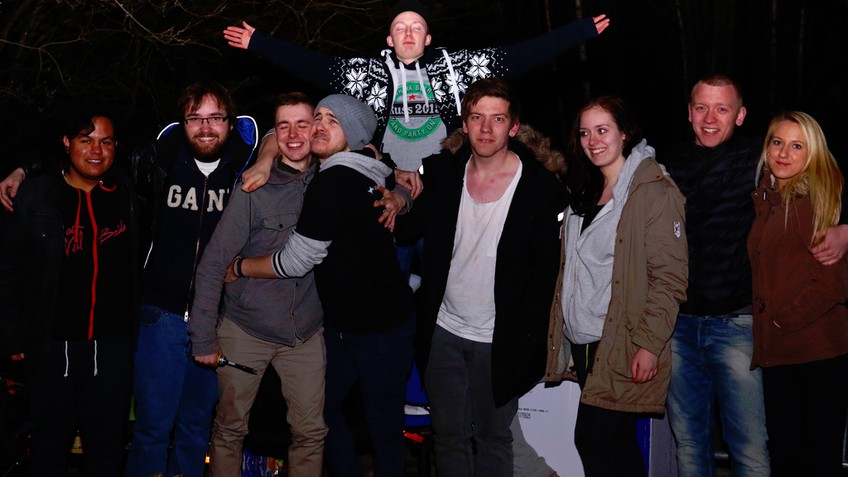 Meet the early birds of TG15

We have latecomers and we have early birds. Say hello to the guys and girls that are already here.

We met some of the many groups that have gathered on the parking lot outside of Hamar Olympic Hall to socialize. Among the groups we met members of KLD (Kakelagringsdirektivet). When we asked why they were early they quickly responded "to get new friends" and had no ambition to get in first. The other group responded "STEMNING" and already had a campfire ready to keep warm through the night. We understood that to meet new and old friends and share the night before the night with them is more important than being the first one inside.

Almost everyone we met had been to The Gathering before, but for some this was the first time. - I’ve been to TG for 9 years now, said a Andreas Standahl, clearly pleased. When we asked the TG veterans for tips and tricks to newcomers we got a lot of repeat answers.

KLD’s (and friends) tips for a successful experience at TG:
- HAVE FUN!
- Drink lots of water, and eat enough!
- Get friendly with your neighbor
- Shower

Andreas Standahl also turned out to be one of the people on the parking lot who had attended TG the most times. Andreas has been to TG for 9 years straight, both as part of the crew and as a participant. Last year he was one of those who tried to get inside first, but this year his goal is to be one of the first to try the new check-in system. He also urges everyone to join them on the parking lot during the night to grill and chill.