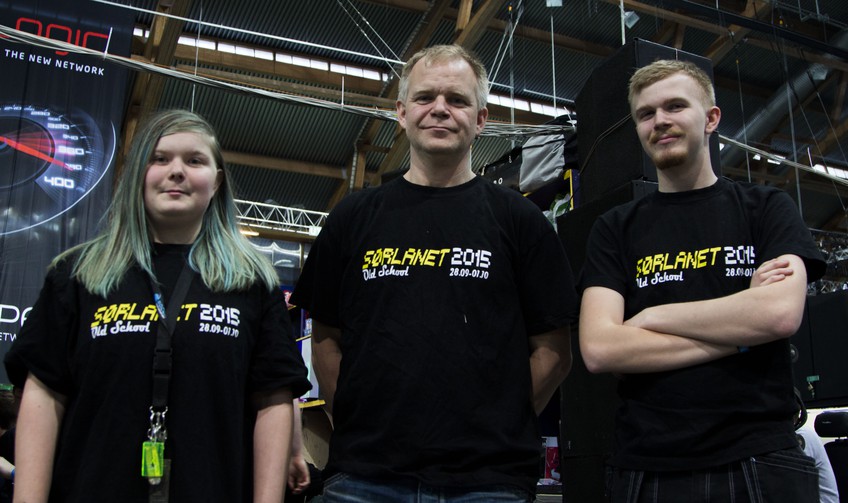 It's not the Dynamic Duo or the Fantastic Four, it's the Terrific Trio of TG15. There are a lot of different people at The Gathering, and we also found a family who is traveling and gaming together!

Per Flodin is 39 years old and this is his 3rd time at TG, this year he brought his daughter Jennifer Flodin, aged 12, along. While this is her first time at TG, it is definitely not the last, she says.

“We are traveling together with our team, Sørlanet, 24 people from Kristiansand. TG is sacred to us, because its the only time we can relax and just be participants. When we are hosting Sørlanet, which is also an event, we don't have time for that.” Per says.

Per also told us about some of his first memories from three years ago: the opening ceremony, and when the lights went out the first time, which is a big thing here at TG, and describes it as magical.

We also got a chance to talk to Jennifer, who first started gaming after she saw her older brother (who is also here) play a couple of years ago, and then she joined the team "Sørlanet". Now she plays too, and her favorite games are World of Tanks, WoW, a little bit LoL and Assassin. Which is also her father's first choice to play at TG. “I think it's really great to be here, there's loud music and we have a scaffolding with big speakers and lights” Jennifer says. “We’ve already got our first warning for making too much noise”, Per adds.

When he’s not attending or hosting computer parties, Per works on an oil rig, and came home yesterday to Oslo, traveled to Kristiansand, slept for one night, then got in the car the next morning to get here. When they are gone, the mother gets a little bit of alone time, while the rest of the family lives in Hamar Olympic hall, gaming, sleeping on tribunes and having fun.

When we ask how they prepare for the event, they tell us that they have prepared a little mentally and have fixed all of their gear, which is a lot for a company of three with so much equipment. Their team will be coming back next year, and their long term goal is to fill a whole row with only members from Sørlanet. To reach that goal they will have to be 86 participants in total.

Jennifer is looking forward to play in competitions, make new friends, and meet old friends. She tells us that one of her friends are here, and they will try to meet – if they can find each other.

When we ask Per what he thinks the best part of TG is, he says, “The best thing about TG is the spirit, the people, and the mood that builds up throughout the week is amazing.“ About his daughter Per says “She's become a really good gamer, and she's just going to get better”.

“We've already got our first warning for loud noise"